An Energy Efficient Home with a Unique Approach

Gary and Gail Sloan are true pioneers in our collective search for a better way to interact with our planet. They have built a revolutionary energy efficient home in Ashland, Massachusetts entirely out of a material not often associated with home construction: concrete. 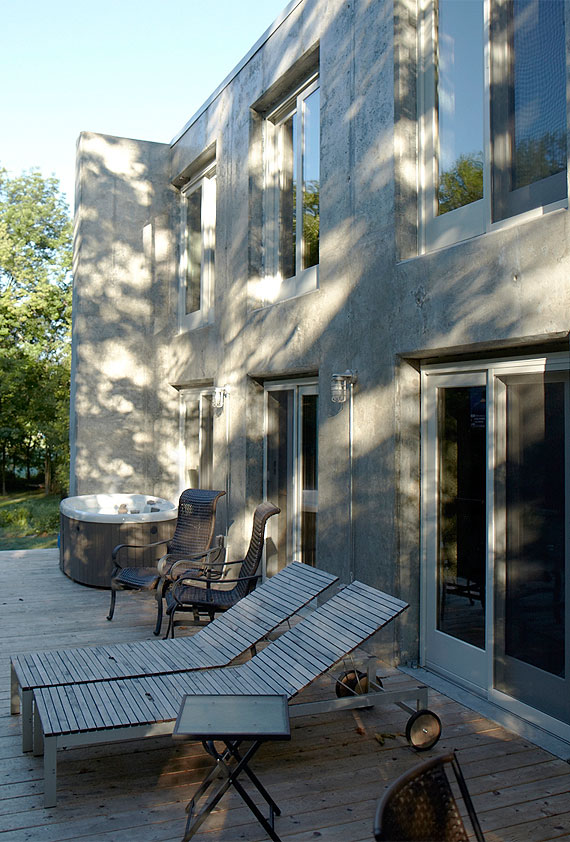 “Oregon Cube started as a hope and a dream. In hopes of making a positive impact on our lives, we set out on an adventure to change how we live.” Gail and Gary Sloan

Despite the challenge of New England winters, the Sloans depend entirely on passive solar heat; they have no gas, oil, electrical or active solar heating or cooling system at all. Nor does the Oregon Cube, as the home is affectionately dubbed, depend on an expensive, esoteric solar storage and delivery system.

“We built our house for about half the cost of a typical stick built home,” Gary tells us.

“The secret is simply that concrete is a very efficient 'constant temperature engine',” he continues. “The concrete has such mass that its temperature stays fairly consistent, and it also keeps the air around it at its temperature. The windows let maximum sun in during the winter and exterior shading keeps the sun out in the summer. We also used Thermomass insulation in the middle of the walls, which allows us to keep the concrete surface, a look we love, exposed both inside and outside.”

That eliminated the need for exterior siding, sheetrock, and paint, which sounds pretty good to us.

What, you may ask, does all this have to do with bath and kitchen design? We knew that the Sloans would have done their homework regarding green fixtures, and indeed they did.

The toilet tank is hidden behind a wood accent wall which holds the dual flush controls.

“On a visit to Iceland, Gail and our daughter discovered the wall mounted tankless dual flush toilet,” says Gary.

The dual flush allows the user to choose the higher setting of 1.6 GPF (gallons per flush), which is still within the low-flush standard set by the E.P.A. in 1992, or the low setting of just 0.8 GPF.

These toilets are common in Europe, but they are not regularly installed by plumbers in the U.S. yet. As with every aspect of their project, the Sloans were diligent in seeking out contractors who were flexible and willing to work with new technologies. The toilet required a six-inch wall behind it for the in-wall tank system, so Gary points out that it may be an easier choice for new construction than for a replacement or light remodel.

The Sloans chose the Toto Aquia® toilet paired with a Geberit in-wall tank system. Now that they've had a chance to live with it, we asked, how do they like it?

“We love it,” Gary answers. “It's small, with a great looking low profile, and super easy to clean. Plus, yes, everybody asks, it does the job without any problem.”

Simple, contemporary bathroom fixtures and cabinetry are perfect for the Sloans' modern decor.

Craftsman-Style Décor Ideas and Tips for Every Room

Home Office Lighting: Tips and Tricks to Brighten Your Workspace

How to Design Inviting and Comfortable Outdoor Spaces

Turkey Meatballs with Fresh Tomato Sauce
You May Also Like

1 item added to your cart