We Have Answers for Your Questions about Shower Fixtures and Faucets

Bathroom remodels can be as extensive as a full-on gut and rebuild or as easy as a change in shower, tub, and sink fixtures. Knowing a little about the different types of fixtures used in the bathroom will help get you started on planning what items you need to update your bathroom with a new look and how much you will need to budget for the project. To assist you in understanding the basics of bathroom plumbing, we've answered a few questions customers frequently ask when they are shopping for tub and shower fixtures. 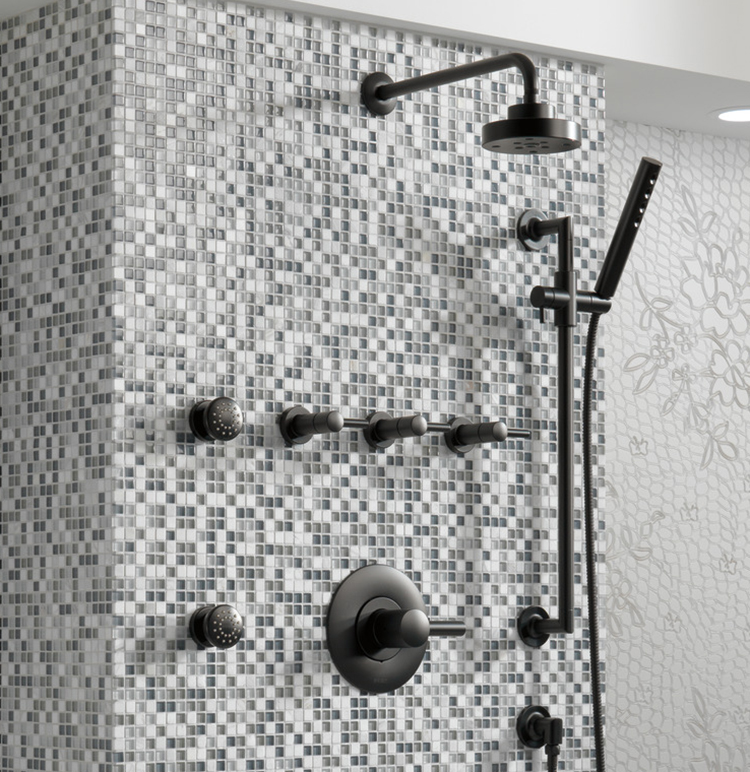 Learn the basics of tub and shower plumbing.

What is a shower diverter?

A tee or single-valve diverter is located on the tub spout. After the water is turned on adjusted to the desired temperature, the bather pulls up the diverter lever to stop the water flow from the spout and divert it to come out the shower head. Pushing the lever back down restores the flow to the tub.

A two-way diverter is used to stop or restore water flow between the tub and shower head. The water is first run through the tub spout until it is mixed to the correct temperature. This diverter has two valves in the shape of an L that pushes the water upward to the shower when it is engaged. This two-way valve is usually located in the center of a faucet that adjusts the water temperature with a single dial or lever that is turned to the left for hot water and to the right for cold. The valve can also be set between the taps of a two-tap faucet.

Like a two-way diverter, a three-way diverter will control the flow of water between the tub and shower head. It is located between the taps on a two-tap tub faucet. First, the taps are turned on to mix the hot and cold water to the desired temperature. Then the diverter is used to adjust the flow to the correct application. Usually, turning the diverter control clockwise 180 degrees will allow the water to flow out the shower head. Turning it counter-clockwise redirects water back to the tub spout.

For larger, more complex shower systems, six-function diverters are available and are generally used to control water to a number of different spray outlets including multiple spray heads, handshowers, and body sprays/wall jets. These diverters must be used in conjunction with a shower faucet control. The diverter control can be integrated into the shower system control or as a separate valve with its own trim kit.

How much does it cost to replace a diverter?

The cost to replace a diverter can vary widely depending your region and on the factors involved in the project such as the tub model, faucet configuration, and trim design. Some diverters can be replaced from the tub side like a drain plug. Some you need to access outside of the tub. Others you need to go through an adjacent wall or from an underlying ceiling.

A minimum plumbing charge could be from $75-$150 and run up to about $300 not including any drywall repair or repainting if the plumber/contractor has to cut through a wall to access the valve. If this is the case, adding a maintenance cover plate on the wall will make it cheaper and easier for future repair access.

Can a tub and shower faucet be used just for a shower?

Although it is easier and more cost effective to use a fixture designed with only a shower head control, you can use a tub and shower faucet in a shower-only installation. Most tub and shower combination faucets can be installed in a shower without using the tub spout. If you do not wish to use the tub function, you can plug the outlet for the tub spout on the valve and not install the spout on the tub wall. Check with the manufacturer's installation manual to ensure the faucet trim allows this.

How much does a shower faucet cost?

The range of prices in plumbing fees and faucet trims can vary widely. On average, the cost to replace a shower faucet can run from $400 - $700. Installing it yourself will bring the cost down and selecting higher quality fixtures can increase the price as will installing more complex shower systems with multiple function and spray options.

What is shower trim?

All trim kits need to be used in conjunction with the rough-in valve that is installed behind the wall or under the deck on tubs. Some manufacturers will offer the trim kits with or without the valves included. If you are replacing existing trim with the same brand that uses the same type of valve, you can replace the outer faucet trim without having to install a new valve.

What is a shower valve?

The shower valve or rough-in valve is the brass plumbing component that allows the shower fixture to function. It is also called a mixing valve since it connects the hot and cold water lines and mixes them to create a comfortable warm temperature. Once the hot and cold water is blended, the shower rough-in valve sends it out to the shower head or tub spout. It is installed behind the wall and has outlets that extend through the wall to connect it to the trim. Each manufacturer uses its own valve design which may be universal for all that manufacturer's fixtures. However, generally a new rough-in valve is needed if you are installing trim from a manufacturer that differs from your existing shower fixtures. 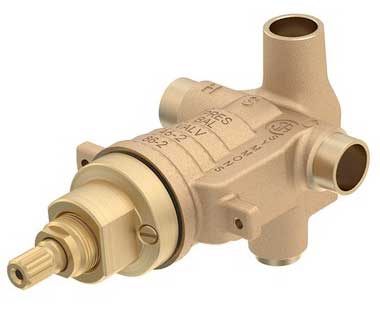 The shower valve or rough-in valve is the brass plumbing component that allows the shower fixture to function.

There are two main types of shower valves: pressure balancing and thermostatic. They differ in how they control temperature fluctuations in the system. A pressure balancing valve is designed to supply water at a nearly constant temperature even when there are pressure changes in the hot and cold lines. This means that when a toilet is flushed or water is needed in other application such as a washing machine or at a sink within the plumbing system, the water temperature would not suddenly become scalding hot.

How do you replace bathtub fixtures?

If your tub spout and tap handles are worn out or outdated, it's time to install new fixtures. Replacing your bathtub faucet is easier than you think. Here are some basic steps to help you remove your existing fixtures and install new.

For more in-depth advice on what to look for when shopping for a bathtub or shower faucet, check out How to Choose Your Bathtub and Shower Faucets in our Advice & Ideas section.

Shower Only Faucets With Valves

Shower Only Faucets With Valves